Most parents keep their child’s best interests at heart when making decisions, but divorce can make things more complicated. Divorcing dads understand that other things factor into a judge’s decision making when determining the custody of the child going forward. While you are fighting for joint custody, sole custody, or visitation of some other kind, it is best to understand child custody laws and learn what the courts look for when deciding custody.

Your first step should be to hire a lawyer, specifically an experienced family law attorney. An attorney will be able to accurately explain the different factors that are considered by the courts during a divorce. They will help you try to prove that you would be an equally good or even better parent to the judge. This can be tricky because laws are different in each state, but your child custody lawyer should know how your judge and your court usually decide on this issue. An attorney can also help you negotiate a custody agreement with your former spouse. However, lawyers are expensive, so if you can’t afford one, you should still seek a lawyer’s advice on your situation. 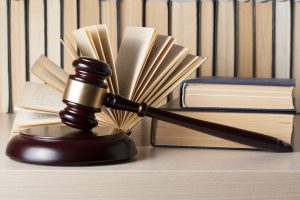 responsibilities. These responsibilities include bathing, feeding, waking, arranging childcare, making appointments, going to school functions, and so on. In some cases, the tasks are split equally, or stay-at-home dads take on a bulk of the responsibilities, but in most situations, women are still most likely to be the primary caregiver, even with a full-time job.
Despite your previous involvement or lack thereof, you should begin taking on these daily tasks going forward in a way that works for you and your family. This will be good practice for when you are the “primary caregiver” for your child after the divorce and the judge will consider your level of responsibility with the child when determining custody.

Child support is critical to the well-being of children of divorce, so much so that parents are expected to support their children in any way possible. Judges understand that times can be tough, especially if you are recently unemployed, but you are expected to put your pride aside and make a good faith effort to pay your child support.

If you have failed to pay child support in the past, the judge may consider that when determining custody. However, you may request that the judge modify your child support agreement based on your practical income.

Be sure to stay calm and don’t let your feelings complicate your divorce. Angry people often make rash decisions based on feelings of agitation and this will likely cause trouble for you in the future. Focus on accepting your situation and staying calm during official divorce proceedings.

If you are unable to pay your child support, it is important to not simply ignore the situation. Paying something, even a small amount, is better than nothing and shows the court that you’re trying to fulfill your parental obligations. If you have trouble speaking to a judge officially about your child support payments, be persistent. You have no chance of reducing your payments if you give up.

Another factor to consider is the relationship you have with your child. Children, especially young children, typically have a stronger relationship with their mother than their father. This isn’t a reflection of the father’s parenting skills, but more of a reflection on typical gender roles. Even today, mothers are more likely to stay home or take time off work to provide for their child and, therefore, the bond between mother and child will likely be stronger during the formative years.

Because young children are often conditioned to turn to their mothers for emotional support and daily needs, it is important that fathers be as involved as they can. If you want joint custody, make an effort to provide for your children’s needs and be available for them emotionally.

For many fathers, bias towards women in custody battles is an unfortunate reality. However, there are still options, including reaching out to a child custody attorney who can help you negotiate custody agreements during your divorce. The attorneys at Allen Gabe Law, P.C. provide such services and are committed to helping fathers during custody battles.

As a specialist in divorce law, family law, litigation, real estate and business and corporate law, Allen has provided responsible legal representation for clients in a wide variety of matters for over 30 years. Allen is also a sought-after public speaker within the attorney community.

Find more about me on: